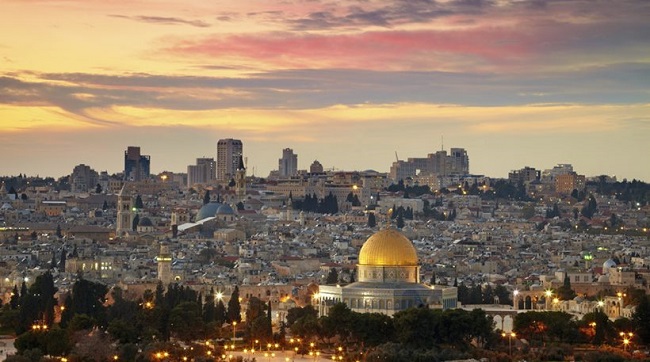 Jerusalem (Hebrew: יְרוּשָׁלַיִם, Arabic: القدس, also referred to as Jerusalem) is a city situated at a height in the mountains of Judea between the Mediterranean Sea and the Dead Sea. The status of the city is the subject of a dispute between Israel and Palestine. Israel has declared it its capital since 1949, and at the same time it is the largest city in Israel [2], but the eastern part of the city is considered by the international community as a occupied part of Palestine [3] [4] [5] the six-day war, in 1967, when the Israeli forces captured it from Jordan. In Jerusalem, the Knesset (the Israeli Parliament), the Presidential and Prime Minister's Home, and the Supreme Court of Israel are located.
It is a city that is a Jewish, Christian and Islamic center of religious and historical significance. It is probably the ancient city Salim, whose king was Melchizedek. This city, which was later called Jebus, was captured by King David by the Jebusites. After the division of the nation of Israel, Jerusalem became the capital and holy city of the Israelites and the southern kingdom of Judah. Also in this city King Solomon built the magnificent Judaic Temple that was destroyed a few centuries later by the Babylonians. Today only part of the wall from the Second Temple, the well-known "wall of tears" or more correctly "Western Wall", is preserved.
The old city of Jerusalem is a monument of world cultural heritage, surrounded by a fortified wall and divided into four districts: Armenian, Christian, Muslim and Jewish. Due to the holy places, it is a significant tourist destination. Its sights include Castro (24 BC), 12th Century Cathedral of St. Jacob, Temple Mount (Haram al-Sharif), Al-Aqsa Mosque (705-715), Troulos (or Tholos ) of the Rock, the Western Wall, the Antony Fortress, the Temple of the Holy Sepulcher, the Garden of Gethsemane, the Tombs of the Kings and the Mount of Olives.

The best time to visit Iran is spring (April to early June) or autumn (late September to early November) when temperatures are enjoyable in most parts of the country. You can travel any other season.

In the winter you will experience extremely low temperatures (several degrees below zero in particular in the western regions) or unbearable heat in the summer (temperatures are rarely reaching 50 degrees in the southern and eastern regions).

Jerusalem has a relatively complex transport system, as it is still in the process of development. The main means of transport to the city is the bus and tickets for this are supplied within it, and there is a specific bus (line 99) that is open to the city visitors and makes a route around all the major sights. In August 2011, a Light Rail linking the north-east to the southwest side of the city was launched.

The term Holy Land refers to areas of Palestine and Israel that have historical and religious value. From the early years of Christianity, pious pilgrims began to flock to the Holy Land. As a result, the pilgrimages gradually began to be established. Even after the fall of Jerusalem by the Arabs, the emigrants of the Christians in the Holy Land continued to suffer.
On trips with the title "Holy Land" we visit the places related to the life, teaching, miracles, passion and resurrection of Christ. At the same time, the same parts are related to the forefathers of Christ of the Old Testament. The Holy Land is also associated with the foundation of the first apostolic and martyr church. In these places came Saint Helen in 33 AD. as a proponent and founded hundreds of temples and monasteries. Since then they have been established in the world consciousness as the Holy Land. Since then and until today, the Greek Orthodox Church has in its guarding and ministry the most important pilgrimages of the Holy Land.