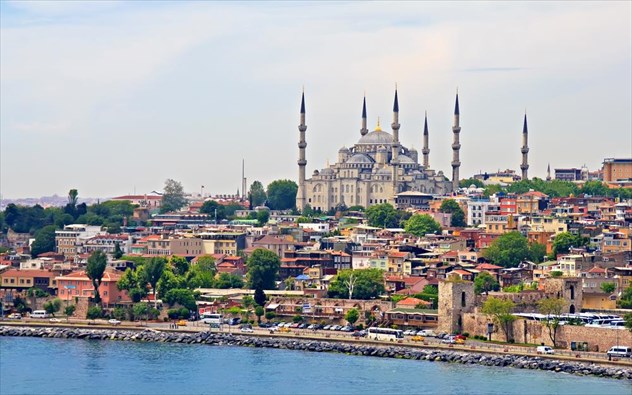 Istanbul, the modern name of Istanbul, Turkey, is Turkey's largest city, making it the economic, cultural and historical center of the country. Istanbul is an intercontinental city in Eurasia, with the historic and commercial center on the European side and about one third of the population living on the Asian side of Eurasia. With a population of 14.38 million, the city is one of the largest urban settlements in Europe and the largest in the Middle East as well as one of the largest cities in the world. [2] The city is within the confines of the metropolitan commune.
Constantinople is built on the site of the ancient Greek city of Byzantium, named after the Byzantine of Megara, who founded it in 667 BC. Since 330, during the Byzantine Empire it was named Constantinople, it retained its name and after its conquest by the Turks to the Ottoman Empire until the years of the Turkish Republic. It is built on both sides of Keratian Gulf (Turkish Haliç) at the southern entrance of the narrow Bosporus Strait, which connects the Black Sea (Karadeniz) to the north with the Marmara Sea to the south. It is thus the only city in the world on two continents, Europe (Eastern Thrace) and Asia [3]. The modern city is divided into three main zones, including the old Constantinople (Turkish Eminönü and Fatih), Beyoglu (turkey, Beyoğlu) with Galatas and the tower of the same name, and Skoutari (Turkish Üsküdar) together with other suburbs on the opposite Asian side of the Bosporus.
In its long history it was the capital of three successive empires: the Roman, the Byzantine Empire (324-1453), the short-lived Latin (1204-1261), and the Ottoman (1453-1922), resulting in the emergence of civilizations in today's mixed existence. As the capital of the Byzantine Empire, it has been the center of the Greek element for more than a thousand years. The historical sites of the city, with important monuments, belong to the UNESCO World Heritage List since 1985 [4]. The most important sights of the city include Hagia Sophia, Eptapyrgio and the Byzantine walls, the temple and the spring of Zoodohos Pigi, the Patriarchal building, the Phanari as well as the Topkapi Palace, the Suleyman Mosque and the Sultan Ahmet Mosque ("Blue glass").
On the old town and the Eminönü region (Turkish Eminönü) is the luxurious palace Topkapi, which was the official residence of sultans of the Ottoman Empire. To the north is the Archaeological Museum and to the east Cinilli Kiosk which today houses a ceramic museum.
A short distance from Topkapi, Agia Sophia (Ayasofya Müzesi) is dominated by the four minarets, next to the At Meydanı area, which is now a public park and is also called the Sultan Ahmet Square. The obelisk of Theodosius I and the obelisk of Constantine Z', as well as the Column of the Ofeos, stand out in the area. At the northern entrance to the horseradish is built the so-called German Fountain, with elements of neo-Byzantine architecture, which was the work of the German government to commemorate the visit of Emperor Wilhelm II to the city. Against the fountain, and southwest of Hagia Sophia, there is the mosque of Sultan Ahmet, commonly known as the Blue Mosque, which is one of the masterpieces of Islamic architecture. It was built in 1610 by Sultan Ahmed the First, and so much money was spent on its construction, which Ahmet then resorted to heavy taxation for the people to refill the state fund. He had personally dealt with the structure and went every Friday and paid the workers. The most valuable materials for the mosque were moved there from the looted Alexandria of Troad. Here the Turks raised their new flag symbolically in 1828 to seal the abolition of the generals of the generals.
There is the burned column in Cebralli Ta. It consists of eight large pieces of porphyry stone and has a height of 40 meters. He had been first dedicated to Delphi, and he brought statue of Apollo, but he moved to Rome and from there to Constantinople. On top of it was a statue of Grand Constantine, which was destroyed by lightning during the time of Alexios of Komnenos.
The site of Suleiman, dedicated to Suleiman I the Magnificent, is also a major attraction. It was built between 1550-1557 and is considered the masterpiece of the then important architect Sinan. The materials for this had been transported from Greece and Egypt. The columns and much of the material were taken from the church of Saint Euphemia in Chalcedon and from the Old Palace.

North of Hagia Sophia, the temple of Agia Irini meets the typical Roman basilica, which also functions as a museum. It was built by Grand Constantine at the site of an old ancient temple dedicated to the goddess Irene and originally the Christian temple was dedicated to "God of Peace" and not to Saint Irene (great martyr) who probably martyred in Persia perhaps in 315). The church for some years functioned as the Patriarchate. It was there in 482 AD. the Second Ecumenical Synod. The church was among the buildings that were burned at Nika's Aton in 532 AD. and rebuilt by Justinian. After the occupation of the city by the Ottoman troops, the temple was transformed into a warehouse and then functioned as a museum, decorated with genjes swords. Then they were transferred to Ankara and from there to the Sports Hall.
Also worth mentioning are the castles along the Bosphorus, dominated by the Rumi Hissar in European Turkey, and the Castle of Anatolia or Anantolos Hissar on the Asian coast.
Also interesting are the coastal walls (from the gate of Eptapyrgiou to Sarai Bournos) as well as the land walls.
In Baloucli, one also deserves to visit the church of Zoodohos Pigi, whose water is miraculous, where it was customary for the emperor to know the future queen.
In the district of Edirnekapı, about 150 m from Theodosian wall, is located the monastery of Chora, which belongs to the most important monuments of Byzantine art, its middle and late period. Other remarkable temples are the Pamamkaristos Monastery (Fethiye Mosque - today a part of the monument is also a museum with significant mosaics), near the Ecumenical Patriarchate, and the Monastery of Saint Sergius and Bacchus (Kioutsuk Agiasofia Mosque). Of particular interest are the two markets: the Egyptian Missir Tsarsi (Turkish Mısır Çarşısı) and Kapali Çarışı (Kapalıçarşı), which is one of the largest markets in the world with an area of ​​approximately 200,000 square meters.
Important sights are also found in the modern city, which is bordered by the Beyoglu area (old Pera district). The Galata Bridge connects this area with the old city, while the Galata Kulesi tower (about 70 meters) dominates the Galata district. The center of the modern city is Taksim Square, or Independence Square, which is a transport hub with numerous entertainment venues. In the Harmiye district, a relatively short distance from Taksim Square, is located the Turkish Museum, Askeri Müze, with exhibits from all periods of Turkey's military history. In the Beioglu area is the Kilets Ali Pasha Külliyesi complex, which includes a mosque, a madresse, a hamam, a small mausoleum and a fountain, built on the orders of Kiljus Ali Pasha. The most important attraction of the area is the Dolmabahce Palace, along with the homonymous mosque and the Baroque Clock Tower Clock. Notable palaces are also Beylerbey, in the district of the same name, and Kioutsukos in the Beikogo district, located on the Asian side of the Bosporus, as well as the Yildes palaces in Besiktas and Siragan, between Besiktas and the Ortakhoy district.

The climate of Constantinople is Cfb and Csb type in the Köppen classification and is generally characterized as mild, with high humidity. It is a temperate climate that forms in the ocean to the northwest. The average temperature is 5.5 ° C in January, 22 ° C in July and 13.6 ° C per year. Average atmospheric precipitation is 124, 34 and 844 mm respectively. Rainfall is frequent throughout the year, and occasional snowfall is also recorded from December to March, but snow cover is generally temporary. Due to its large area, Constantinople is characterized by climatic diversity. The lowest temperature ever recorded in the city is -16.1 ° C (February 9, 1927) and the highest 40.5 ° C (July 12, 2000)

The currency of Turkey is the Turkish lira (TL). One Turkish pound is equivalent to approximately € 0.40 (you can find the equivalent of €, by dividing the amount of pounds by 2 and calculating slightly less than the result). Foreign exchange can be done at the exchange bureaus (Doviz Burosu) and in banks.