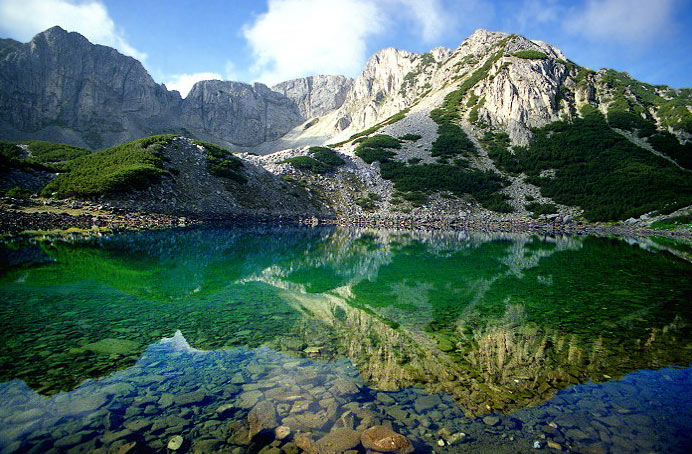 Bansko (Bulgarian: Bansko) is a town of 9,212 inhabitants on Bulgaria's Pirin Mountain, at an altitude of 936 meters above sea level. There is a train station in the city. The city is a great tourist destination especially during the winter season because of the homonymous ski center that has excellent organization with good quality snow. After organizing the first jazz festival in the city, Bansko gained international cultural interest.

Bansko, sometimes a community of mainly breeders and traveler traders, has become an international center of winter and summer tourism. Mountain peaks near the city, numerous lakes and pine forests make it a popular area for leisure. Bulgaria's share of European winter tourism is steadily increasing and Bansko is increasingly competing with ski resorts in France and Switzerland due to comparatively lower costs but not quality. To accommodate the growing number of tourists, improvements have been made to the infrastructure and organization of the ski resort in Todorca. In 2003, a cable car was installed from the city, replacing the route of a small bus to the center of Baniteiska Poliana. In 2010 the ski center had 75 km of ski slopes, 14 ski lifts, serving up to 24,500 people per hour. The ski-lifts peak is at an altitude of 2,600 meters. The altitude difference is about 1,000 meters from the base of Banderitsa Poliana and over 1,600 meters from the city.

The neighboring village of Banja, located just 5 km from the city, is known for its 27 thermal springs.
The city is served by the scenic narrow-gauge railway line from September to Dobrinisse. Regular bus services exist, among others, for Sofia, Plovdiv, Blagoevgrad, Gotse Delchev and Razlog.

Many of the infrastructure problems have begun to be tackled since 2009, as well as a large part of the incomplete apartments. Due to the global recovery from the financial crisis and more realistic pricing, the apartments attract more buyers from all over Europe. In 2010 the center recovered from the crisis and had a record of profits.
The highest point of the ski resort is 2,560 meters and the lowest at 1,000 meters. Bansko has 75 km of ski slopes, of which 35% are for beginners, 40% for experienced and 25% for advanced skiers and snowboarders. 80% of these areas are equipped with artificial snow machines. Thanks to the TechnoAlpin's 170 TechnoAlpin snow cannons and the Kassbohrer rollers, the season starts in December and ends in May. In addition, there is an eight-seater closed funicular, a six-seater, six four-seater and a three-seater cable car. There are also six ski lifts and ten children's lifts.

The best time to go to Bansko depends on what you are looking for. In the winter it is very cold and plenty of snow and it has ideal conditions for skiing and other winter sports. Many times the temperature falls in the winter to get your warmest clothes. However, in the summer, the temperature is mild so it is a good destination to avoid the extreme heat of Greece.

The distances in Bansko are not big, you will not see many taxis in Bansko. In most cases the hotels in Bansko provide free transfer to the gondola lift to its guests. All the same, if you need to use the services of a taxi, we always encourage you to ask the driver about the price for your final destination. Taxis station at the bus station, gondola, the Strazhite hotel and the Pirin hotel. There are two taxi companies in Bansko

It is a good idea before you leave for Bansko to have a symbolic exchange for your first expenses, because at the time you arrive, the bureaus can be closed. To estimate the exact amount you will need, you can consider that 1 euro is about 1.96 leva.