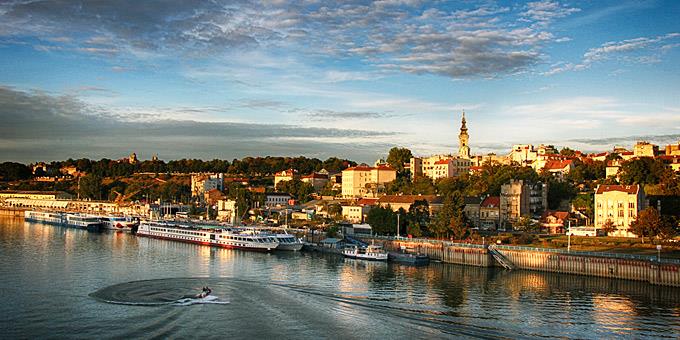 Belgrade (Serbian: Beograd, meaning White City) is the capital and largest city of Serbia. It is located at the confluence of the rivers Sabus and Danube, where the plain of Pannonia meets the Balkans. The main city has a population of 1.23 million, while over 1.65 million people live within its administrative boundaries.
One of Europe's most important prehistoric cultures, Vindsa Culture, was developed in the Belgrade region in the 6th millennium BC. In antiquity, they lived in the Thrako-Dakes area and after 279 BC. the city was captured by the Celts, calling it Sindigun. He was captured by the Romans over the reign of Augustus and acquired city rights in the middle of the 2nd century. It was enslaved by the Slavs in the 520s and changed hands several times between the Byzantine, Frankish and Bulgarian Empires and the Kingdom of Hungary, before becoming the capital of the Serbian King Stephen Dragutin (1282-1316). In 1521 Belgrade was conquered by the Ottoman Empire and became the seat of Sanjakiu of Smederevo. It often went from Ottoman domination to that of the Habsburgs, with the destruction of most of the city during the Austro-Ottoman wars. Belgrade was once again the capital of Serbia in 1841. Northern Belgrade remained the southernmost Habsburg occupation until 1918, when the city was reunited. As a strategic location, the city was a battlefield in 115 wars and leveled 44 times. Belgrade was the capital of Yugoslavia (in various forms of government) since its establishment in 1918 until its final dissolution in 2006.
Belgrade has a special administrative status within Serbia and is one of the five, in its statistical, regions. Its metropolitan area is divided into 17 municipalities, each with its own local council. It occupies 3.6% of Serbia's territory and 22.5% of the country's population lives in the city. It is the largest city in the former Yugoslavia and the fourth largest in the Balkans after Constantinople, Athens and Bucharest.
Belgrade's historic sites and buildings are among the top attractions of the city. They include the Scandarlgia, the National Museum and the neighboring National Theater, Zemun, Nikolay Pasic Square, Theragiye, Student Square, Kalemegdan Fortress, Knez Mihajlova Street, Parliament, Saint Savva Church and the Old Palace . Besides there are many parks, monuments, museums, cafes and restaurants and shops on both banks of the river. The Above Monument on top of the hill and the homonymous tower offer views over the city.
The prestigious Dęntine district is close to the Tuppentre and Coswonie Parks. The White Dwarf (White Palace) of the royal Karatzorjevic family is open to visitors and has many precious works of art. Nearby Yosip Broz Tito's mausoleum, named Flower House, records the life of the former Yugoslav President.
Anta Tsiganliya, a former island on the River Sava, is Belgrade's largest sports and entertainment complex. Today it is connected to the right bank of the river Savoy with two elevated roads, which create an artificial lake. It is the most popular destination for the inhabitants of Belgrade on the hot summer days. There are 7 km of beach and sports facilities for various sports such as golf, football, basketball, volleyball, rugby, baseball and tennis. In the summer there are 200,000 to 300,000 bathers per day.

Extreme sports like billiards, water skiing and ping pong are also available. There are many routes on the island for cycling, trekking or jogging. Apart from Adana, Belgrade has a total of 16 islands in the rivers, mostly still untapped. Among them, the Grand Island of War, in the contribution of Savoy, stands out as an oasis of undisturbed wildlife (especially birds). These areas, along with the nearby Little Island of War, are protected by the municipal administration as a natural retreat.
Tourist income in 2012 was 500 million euros. In 2013, Belgrade visited 660,000 registered tourists, of whom 520,000 were foreigners. Of these, more than 70,000 arrived with 550 river cruise ships. In 2013 the increase in foreign tourists was 24%.
NIGHTLIFEBelgrade is famous for its intense nightlife. Across the city there are clubs that are open until dawn. The most recognizable feature of Belgrade's nightlife is the beauties that lie on the banks of the Savo and the Danube.
Many weekend visitors - especially from Bosnia and Herzegovina, Croatia and Slovenia - prefer Belgrade's nightlife to that of their capitals because of the apparently friendly atmosphere, abundant clubs and bars, cheap drinks and lack of linguistic difficulties, and restrictive arrangements.
Known alternative clubs are Akandemia and CST, located in the basement of the School of Electrical Engineering of the University of Belgrade. One of the most famous venues for alternative cultural events in the city is the Student Cultural Center, located just opposite Belgrade's skyscraper-landmark, Beogradanka. In this center frequent concerts of local and foreign bands are held. it is also the place of various art exhibitions as well as public dialogues and discussions.
A more traditional Serbian nightlife experience, accompanied by traditional music, known as Starrogranchka (translated as Old Town Music) typical of the urban areas of northern Serbia, prevails in Scandarliya, the old Bohemian quarter of the city, where poets and Belgrade artists in the 19th and early 20th centuries. Scandar Street (the center of Skandarljiga) and the surrounding district are surrounded by some of Belgrade's finest and oldest traditional restaurants (called cafes in Serbian) dating back to that period. At one end of the district is the oldest brewery in Belgrade, founded in the first half of the 19th century. One of the oldest cannabis in the city is the Znak Pitania.
The Times in 2008 said that Europe's best nightlife is in Belgrade. In 2009, Lonely Planet's "1000 Absolute Experiences", Belgrade was first placed among the top 10 cities for parties in the world.

It is clearly a winter destination!

Belgrade has an extensive Belgrade public transport system based on buses (118 urban lines and over 300 long-distance ones), trams (12 lines) and trolleybuses (8 lines). Managed by GSP Beograd and SP Lasta, in cooperation with private companies on various bus lines. The BusPlus ticket system, based on non-contact smart cards, began operating in February 2012. Belgrade also has a suburban railway network, Beowav, run by the municipal administration. The main railway station connects Belgrade with other European capitals and many Serbian cities. Coach trips are also popular and the capital is well served by daily connections to every Serbian city and many other European destinations via the central bus station.