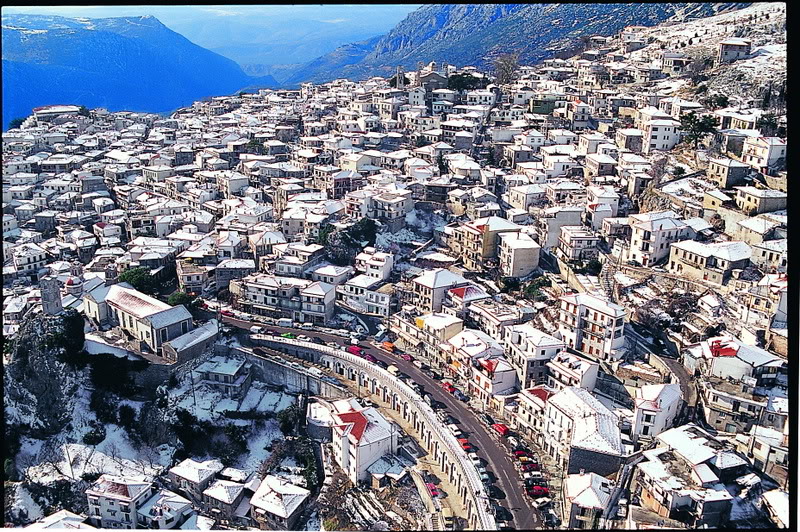 Arachova (or Arahova) is a mountainous town of the Prefecture of Viotia, built on the southern slopes of Mount Parnassus at an altitude of 950 meters. It was the seat of the commune of the same name until its end, while with the implementation of the Kallikratis program it joined the new Municipality of Distomo-Arachova-Antikyra, of which it is a Municipal Unity. Its population according to the 2011 census is 2,657 inhabitants. It is a popular winter resort thanks to the existence of a ski center (which was last expanded and renovated) and its short distance from Athens (153 km).
SightsWatchA true gem for Arachova is the steep rock with the clock.
Built in 1860 as the bell tower of the Metropolitan Church of the Presentation of the Virgin Mary, it did not withstand the devastating earthquake of 1870 and collapsed.
In the late 19th century, Abbot of the Holy Monastery of Hosios Loukas, Gregory of Cambassinos, undertook at his own expense to rebuild, giving it its present form.
As for the rock in which it dominates, it is called Cheese and served as a natural refrigerator for the storage of cheese, while during the Occupation the locals hid various objects there. According to the Arahovites, at that point Dalelis went up to announce the news of the village. Today, the Clock or Time - for the locals - stands proud, reminding everyone of the endless journey of time, while in the evening, illuminated is an ideal "postcard".
Holy Church of St. GeorgeThe church of Agios Georgios is one of the two parish churches of the village and stands in a prominent position at the top of the village, at the foot of Mount Parnassus.
This church always impressed the strangers. Written testimonies confirm that there was already a temple in 1676. But it is unknown how many years ago there was already in the same place.
Today's temple was built in 1833, as it shows a relief slab in Simeon Vima, at a crossing of a three-aisled basilica with a dome. It is a brilliant temple, painted with modern frescoes, with huge bells in the bell towers that surround the entrance of the church (the old bell weighs a ton and has a diameter of 1.2 meters). The tumultuous space is decorated with embossed plaques with patterns of Arachovian woven fabric, a work carried out by Arachovite craftsmen.
The space around the church has been linked to the history of the place as the headquarters of Karaiskakis in the Battle of Arahova in 1826, as well as to the events of the Second World War and the period that followed, as the historical enclosure with the old cannon, the northern wall of the church beaten by bullets.
The Ministry of Culture on 11 July 2000, with the decision of the Ministry of Culture / ARCH / B1 / Φ26 / ΚΗΡ / 22508/680, described the church, the precinct and the chapel of Agios Spyridon as a historic listed monument.
From its erection to its present form, all the construction and decoration costs were covered by Arachovites.
In this beautiful church and the surrounding area, Arachovites celebrated Pigiriaki, the three-day celebration in honor of St. George.
The Karaiskakis HeroAt the western exit of Arachova, Georgias Karaiskakis is portrayed on three hundred stones reminiscent of the heads of the dead Turks demanded by Commander-in-Chief Karaiskakis for the monument that was set up shortly after the end of the victorious Battle.
In Heroes, events take place on the eve of national holidays with school parades and wreathing by local actors.
As a custom has reached to this day, a small pupil of the Arachova Primary School usually ends up taking the wreaths and climbing to the bust from the back to defeat the great general of Greece and then to turn him the mustaches with such simplicity as the grandson plays with his grandfather.
Arahova in the evening puts her good and welcomes you to get to know her better. Whatever your plans for your night out, you have a lot of choices on how to get started and how you will eventually close the epitome of a great night. From taverns and restaurants to gourmets, bars and nightclubs for the anxious, until a simple walk in the market for romantic, Arahova fits all through the day and night. Fun is undoubtedly one of the trumps of the area.

It is obviously not accidental that Mykonos of winter!

The climate of Arachova is dry in the summer, with dew and chill even in the evenings, especially in Livadi, while winter is cold with remarkable rains and snowfall.
It sinks densely with NW or NW winds, several times in the city, but its Southern orientation, which results in greater sun exposure, does not favor the maintenance of snow for several days.
The local NE wind (Ketavatos), does not favor Arachova phenomena, only the bitter cold prevails with sunshine, unlike other regions. This is because Arachova is located on the southern slopes of Parnassus, so the mountainous mass of Parnassus largely prevents the passage of systems from the North.
The National Observatory of Athens has installed a weather station in Arachova, where you can view meteorological data and forecast weather.

Movement in Arahova is simple as distances are very small.

The history of the Parnassus Ski Center starts in 1967, when the French company Pechiney Aluminum of Greece, based in Distomo Beach (White Houses), placed the first lifts in Fterolakka, creating a rustic ski resort. Arachova was favored by its proximity to Delphi. Visitors to the Delphi archaeological site have led to the tourism utilization of the area that grew longer after the creation of the ski resorts and the development of winter tourism in Greece. (1959), Maria Callas (1959), The Bits (1967), Constantine and Anna-Maria (1966), King Paul (1966), King Paul and Frederick (1939), Miss World, Korina Tsopeni (1964), Kennedy Fireplace and so many others have left their mark on their presence in the famous village.